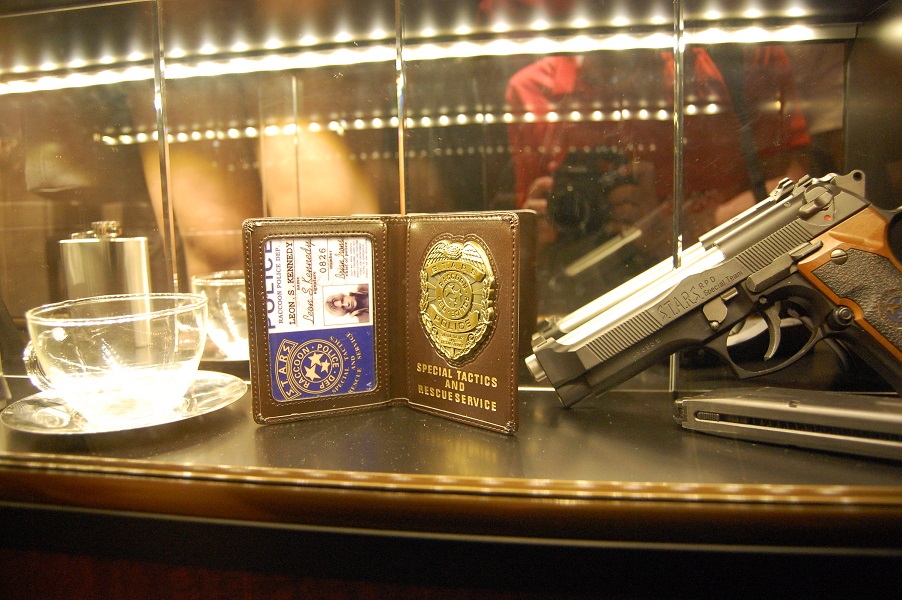 With the imminent release of Resident Evil Village on the horizon at the time of the writing of this post, I decided to look back on the Resident Evil collaborations and promotional events I encountered during my stays in Japan. Resident Evil, or Biohazard (バイオハザード) as it is known in Japan, has been an enduring and popular franchise in both the United States and Japan. However, due to Japan’s media mix culture and extensive history of corporate cooperative marketing, collaboration events such as themed cafes and promotional events including branded trains are very common sights-something I wish the U.S. would emulate outside of Los Angeles.

This Biohazard S.T.A.R.S. cafe was set up in a department store building in Shibuya. Like most themed cafes we were assigned a time to enter and as our appointed hour drew near we waited for a short time outside the doors before we were shown in. As the cafe had just opened, there were several traditional congratulatory flower arrangements for a new business opening as can be seen in the first photo. Orchids are particularly auspicious for this kind of floral gift. We spent a few minutes looking at the decorations, which included Raccoon City newspapers, S.T.A.R.S. weaponry, and samples of the Umbrella Corporation’s T-virus before we were shown into the dining room. 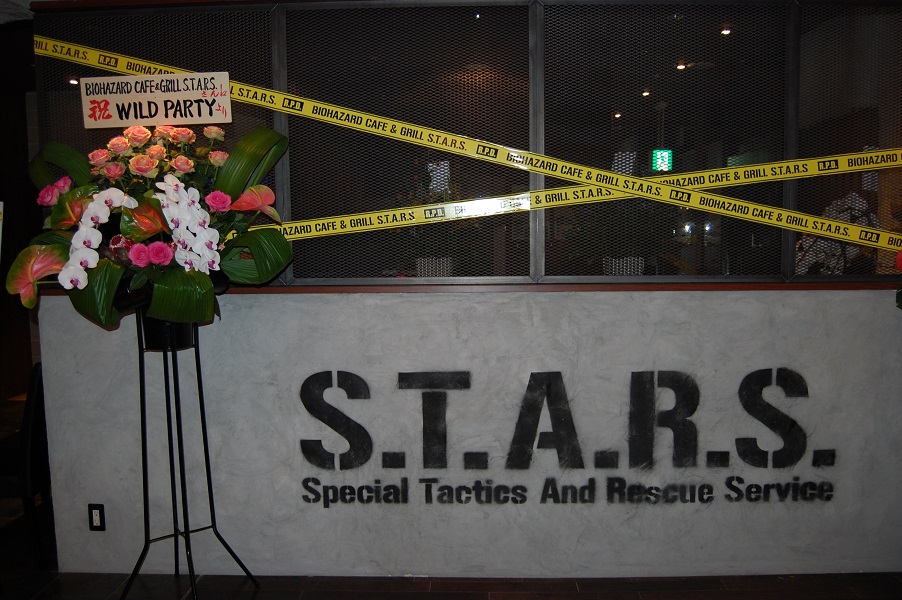 Once we were seated, we checked out the room, which was decorated with maps of Raccoon City. The centerpiece of the dining area was a statue of a Tyrant from the original Resident Evil. The menu itself was fairly standard for a collaboration with various drinks and dishes named for Resident Evil characters and items, such as the Red and Green salad. The interesting gimmick was that the meals were served in a military style metal food container emblazoned with the S.T.A.R.S. logo. Before the meal was served, we watched an dance number preformed by staff dressed in S.T.A.R.S. uniforms. This was unusual for a collaboration cafe in my experience, which usually relies on the props and theme to keep customers interested. Once we were finished with dinner, we were able to pose for photos with the Tyrant statue in the center of the room (guns were thoughtfully provided by the staff for added role play fun). We also picked up the S.T.A.R.S. coasters to add to our collection. 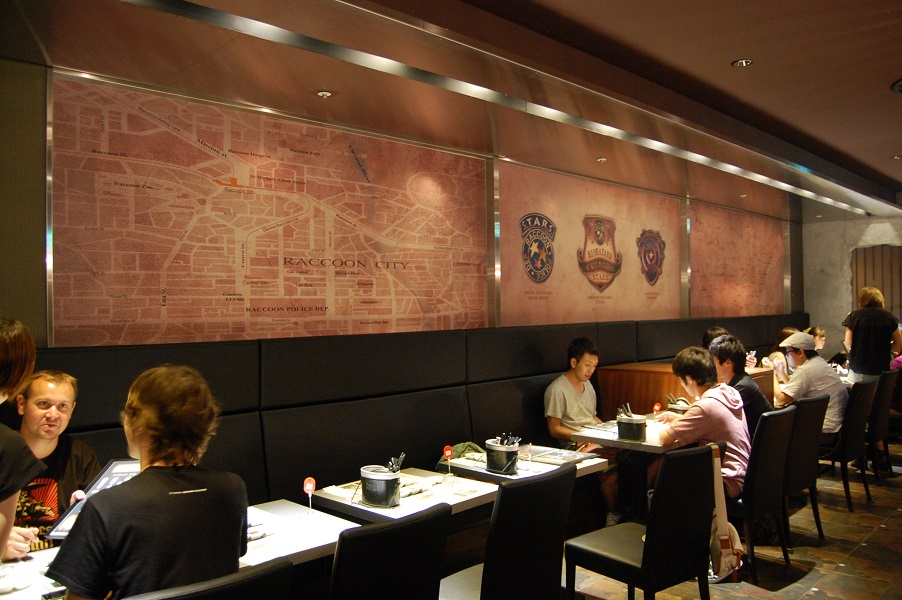 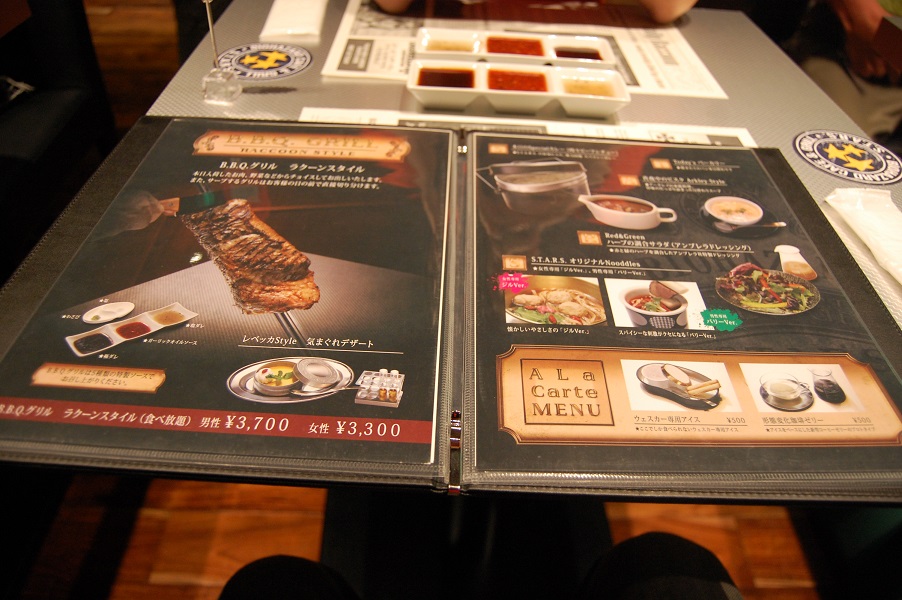 This collaboration with the Sega Joypolis complex in the DECKS Tokyo Beach mall was an escape room, set up to resemble the Baker mansion from Resident Evil 7. The ivy covered columned entrance of the mansion/escape room can be seen behind the pillars holding the Biohazard signage. Visitors were let into the escape room in groups of about 10 led by a guide. As this was an attraction that anyone could enter who had paid the entrance fee to Joypolis, the guide served as a timer and as a way to keep visitors moving through at pace where multiple groups could be accommodated as quickly as possible. There was always a line of about 20 people during the four hours we spent at Joypolis. This attraction proved to be a memorable adventure, as the other members of our random group were at first reluctant to engage with the room. This meant the very first clue, a ringing telephone, rang for quite awhile as everyone kept eyeing each other to see who would make the first move. Finally, my partner stepped forward to answer it. As she is conversational in Japanese– although not completely fluent–she was able to figure out the first clue from the recorded message and find the key which opened the door to the next room. 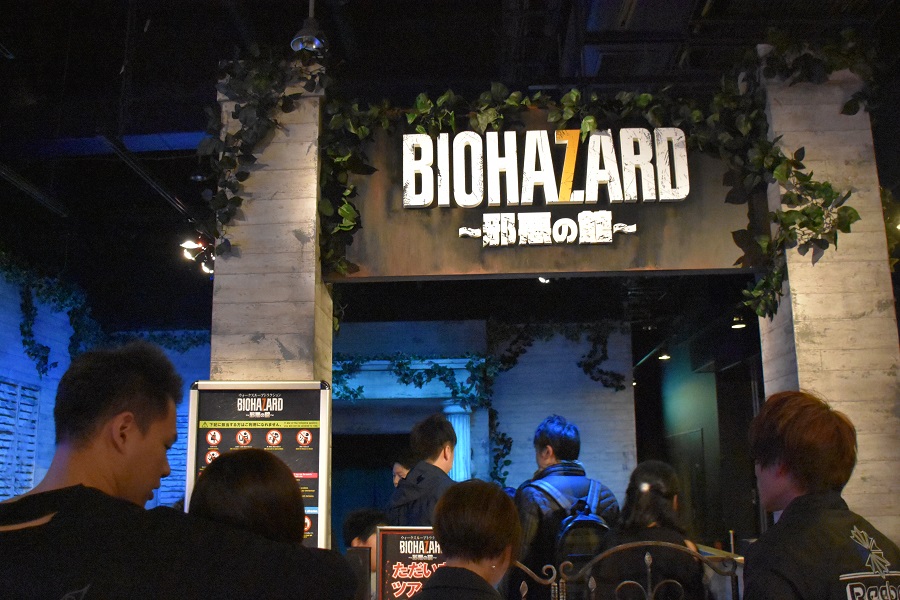 As the rest of our group warmed up to the concept after that, we progressed through the rest of the house at a good clip until we reached a storeroom, all the while aware someone was following us through the house. We entered a corridor and at this point the guide told us to hurry to the next room as our pursuer was almost upon us and gave us a clue to our next step, In the rush to get into the room and avoid Jack Baker (we presume), both my partner and I missed what was said. Our fellow group members weren’t able to figure out what we were supposed to do-although afterwards my partner and I decided we were either supposed to move boxes in front of the door or get behind the boxes. The game ended with Baker banging on the door and the guide announcing we had lost. We did not get the prize for completion but did enjoy ourselves, as well as being reasonably satisfied with our performance in a completely Japanese language escape room.

Joypolis often has collaborations with media franchises, and two we have seen in the past are Neon Genesis Evangelion and the American program Prison Break.

More of a small obaku yashiki (haunted house), this promotion was set up in Shibuya in the large entryway to the Shibuya MODI shopping center. I encountered this promotional event by accident when meeting friends at the New York City themed Rainbow Karaoke. Unfortunately, I arrived just as they were closing up so I was not able to go inside, instead settling for a few photos of the exterior. 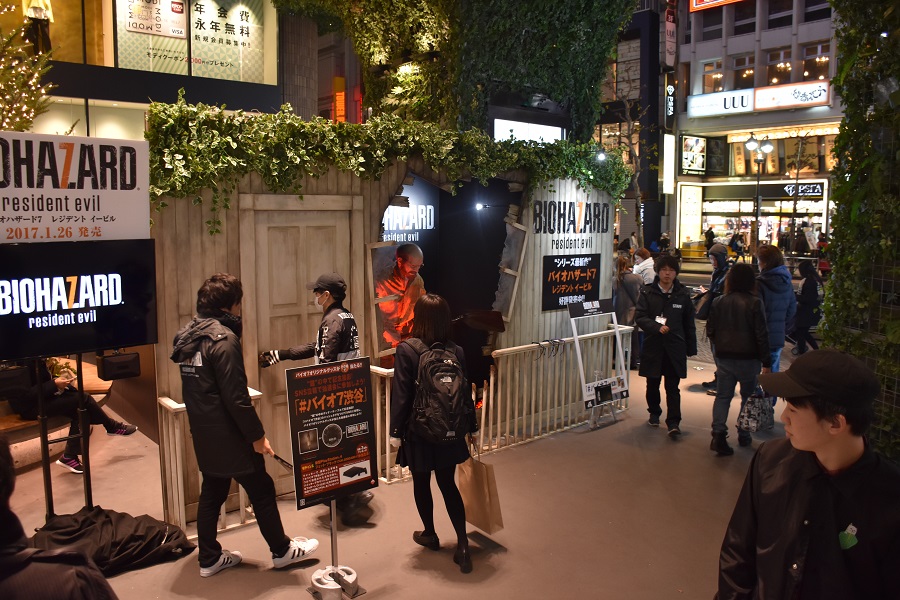 In a related Resident Evil note, I wrote the entry for Resident Evil: Damnation for the Encyclopedia of Japanese Horror Films (2016), edited by Salvador Murguía. I also contributed the entry for Sweet Home, the film that inspired the first Resident Evil. Full disclosure: I make no profits off the book.