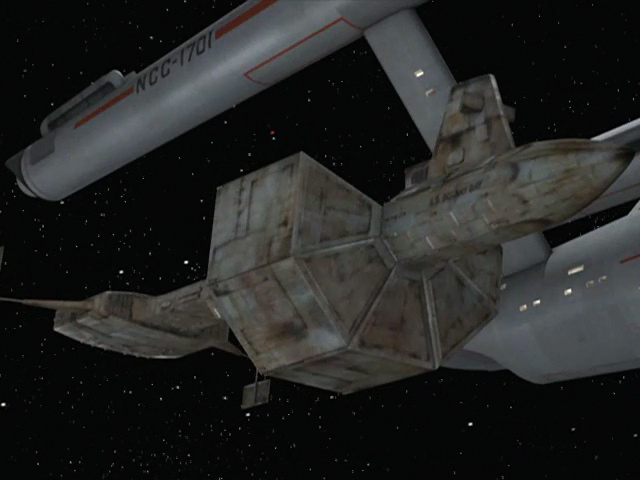 While Star Trek often draws from history for ship names, the historical significance of the name rarely ties in to the role of the vessel in the series’ narrative. The S.S. Botany Bay is an exception, as the historical connotations of the name connects directly to Khan’s story. The S.S. Botany Bay was the DY-100 sleeper ship used by Khan Noonien Singh and his augmented followers to escape Earth in 1996, as related in the 1967 episode “Space Seed.”

“Do you mean he never told you the tale? To amuse your Captain, no? Never told you how the Enterprise picked up the Botany Bay, lost in space from the year 1996 with myself and the ship’s company in cryogenic freeze?”
Khan Noonian Singh, Star Trek II: The Wrath of Khan

The ship draws its name from Botany Bay, a small natural harbor on the east coast of Australia. The area was first mapped by Europeans when Lieutenant James Cook sailed into the bay aboard the HMS Endeavour in 1770. The bay was initially named Stingray Bay in Cook’s log due to the large number of the aquatic animals sighted. In a second log entry, Cook commented on the large number of plants found by his crew which inspired him to name the embayment Botany Bay, working off the word “botanist.”

Fun fact: The HMS Endeavour is the namesake of the NASA Space Shuttle Endeavour and later the Federation starship USS Endeavour (NCC-71805). That name will be covered in a future article.

With the independence of the American colonies in 1783, Great Britain found itself with a judicial dilemma. The former British colonies of North America served as the destination for the practice of transportation, in which convicted criminals were shipped abroad to serve out a sentence. Law and justice in the 18th century was a harsh affair. In particular, crimes against property were considered just as heinous as more violent crimes in a burgeoning capitalist and socially stratified British society (cue Law and Order: SUV music). The English legal code of the late 1700s had nearly 200 capital offenses, most of which were relatively minor crimes that would not warrant death in modern society. Transportation was introduced as a far more merciful alternative to a death sentence. Violent crimes such as murder were still dealt with through capital punishment. The convicts sent to Australia were generally sentenced to 7 years of exile and labor.

Transported convicts were expected to aid in the building of a new colony and through their labor repay their debt to society. After completing their sentence, the convict was allowed to return to Great Britain or they could remain as free citizens in the new colony. In practice, transportation proved permanent as the convict was responsible for their passage back and it was difficult to marshal the resources necessary to return to England. As the newly formed United States was unwilling to accept further transported convicts after the end of the American War for Independence, the British government turned its attention to Australia as a place to found penal colonies. In 1787 eleven ships departed for Australia, carrying approximately 800 convicted criminals along with civilian settlers, marines and crew under the command of Commodore Arthur Phillip. This flotilla became known as the First Fleet.

The First Fleet arrived at Botany Bay in 1788, after a long 250 day voyage. The fleet found Botany Bay was not the pristine harbor as described by Cook in his report. Growing increasingly concerned about the poor conditions of Botany Bay, Commodore Phillips scouted the nearby area and opted to found the colony twelve miles north at Port Jackson where there was fresh water and a protected anchorage for the fleet. There at Sydney Cove, a small bay within the larger natural harbor, Phillips decided to name the new colony Sydney, which evolved into the modern day capital of Australia. Today Botany Bay is part of the greater Sydney metropolitan area and the location of the city’s major seaport and airport.

Despite Botany Bay being quickly abandoned for Sydney Cove, the name stuck in the minds of British citizens to the point where “Botany Bay” became the general term for transportation to Australia and to refer to all the British penal colonies eventually founded on the continent for some time afterwards.

The fate of the Botany Bay penal colony mirrors that of Khan and his people on Ceti Alpha V. Khan and his crew were exiled—albeit willingly—from Earth with the likely intention of returning after an indeterminate amount of time. Transported convicts were expected to help in the development of a new colony. Kirk offered Khan the same option, exile to a harsh environment on the planet Ceti Alpha V where they could build a new society. Just as Commodore Phillip found Botany Bay to be inhospitable and a poor choice to found a colony, so too did Ceti Alpha V prove to be a poor choice for settlement. Perhaps if Marla McGivers or other members of the Enterprise crew had been a little more versed in Earth history and suspicious of the connotations around the name Botany Bay, Khan would have been put under stricter guard. Then again, the story of the SS Botany Bay and its genetically augmented crew is an abject lesson in always filing your paperwork.