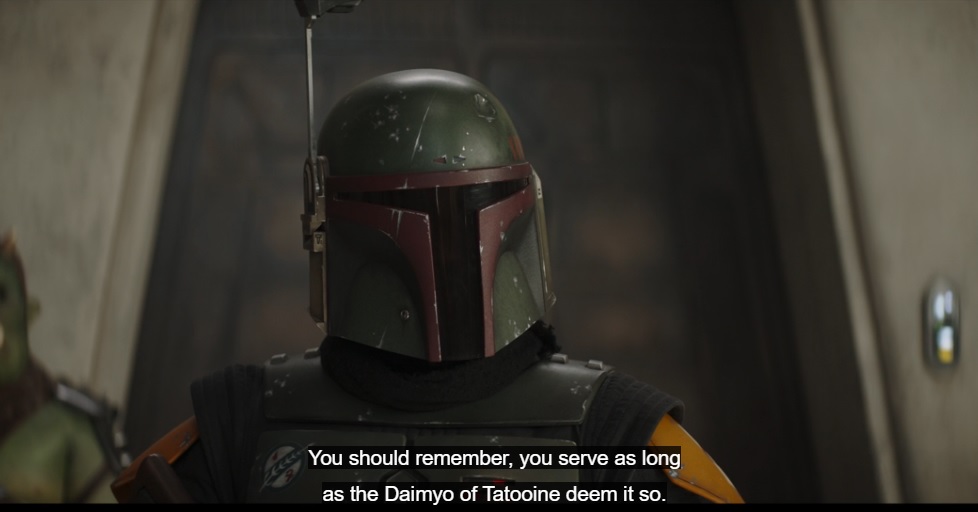 <warning: mild to moderate spoilers for episodes 1-4 of The Book of Boba Fett follow>

Early in episode 1 of The Book of Boba Fett, the titular character receives emissaries from the various factions on Tatooine after taking over as criminal overboss. One, a Trandoshan, addresses Fett with the Japanese title “daimyo” (大名) Daimyo is used again in the same episode a short time later and Fett refers to himself as the “daimyo of Tattooine” in episode 2.(1)

The selection of daimyo as a term for Fett’s position is one that shows the influence of Japanese culture on the American imagination and further cements the Star Wars television universe of The Mandalorian as a Western by way of a Kurosawa film–not unlike how the origins of Star Wars are embedded with the DNA of Akira Kurosawa’s The Hidden Fortress and how the Jedi borrow from samurai. But what does daimyo mean and what does its use in Boba Fett say about American thinking about Japanese history? 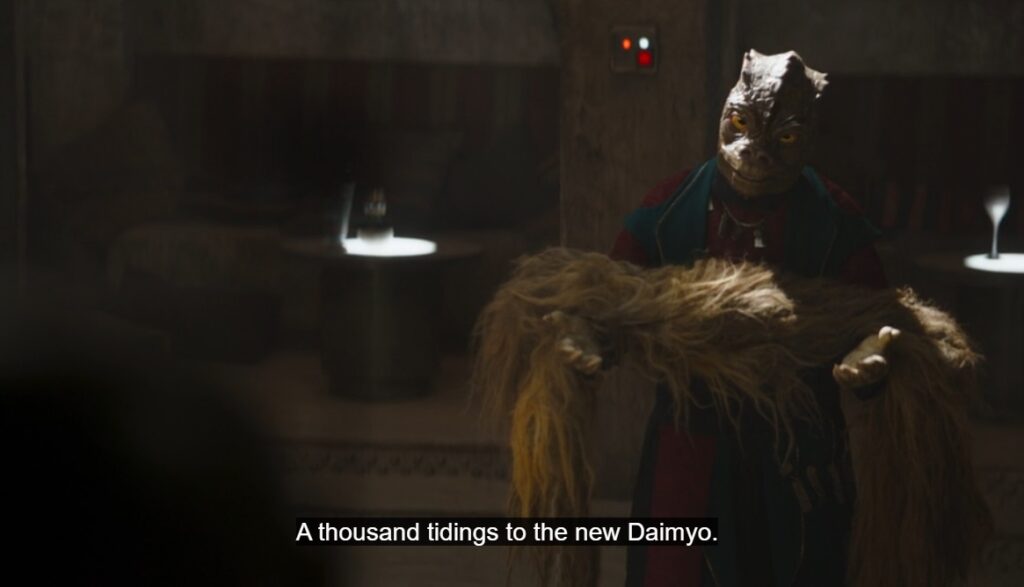 In the most general terms daimyo were a class of military lords who each controlled a force of samurai and their own domain (藩). During the Sengoku era (戦国時代, warring states period) the central authority of the Ashikaga shogunate was weak and hundreds of daimyo were at constant odds with each other, vying for power and control over a fragmented Japan.(2) This era lasted from 1457 to 1615 and is perhaps the Japanese premodern period best known to American audiences, as it is when Kurosawa’s samurai films are set. The influence of Kurosawa on the Star Wars creative teams and the constant conflict of the era are also another reasons why the Sengoku forms the core of Japanese historical influence on Star Wars. One such daimyo, Nobunaga Oda, almost succeeded in unifying Japan under his rule in the last 1500s. After his death (subject of a future blog post), the conquest of Japan was completed by fellow daimyo Toyotomi Hideyoshi. Toyotomi’s family rule was not to last, as power was seized by daimyo Tokugawa Ieyasu who founded the Tokugawa shogunate in 1603. During the Tokugawa shogunate the power of the daimyo were limited due to the strength and policies of the Tokugawa government.(3) The supremacy of the shogun was relatively undisputed during this era, lending Japan over two centuries of internal peace. The daimyo as a class were abolished in 1871 after the collapse of the Tokugawa shogunate and the Meiji Restoration, which installed the Emperor as head of the Japanese polity.

The use of daimyo for Boba Fett’s rule fixes the Star Wars universe to a particular vision of Japan. It invokes the era of strife and conflict among warring factions instead of the Tokugawa peace, where many of the ideals of samurai culture of honor were cultivated and codified. It also places Fett (and Jabba before him) into a historically defined role, conjuring up some significance for those viewers with an idea of Japanese history and samurai culture. Daimyo Fett is a regional lord, ruler of his domain and owed fealty by the vassals below him. It also implies that there may be a higher, stronger force which fills the position of shogun in this Star Wars power structure. Yet given the chaotic nature of the Mandalorian/Fett series, it is just as likely that no central authority exists–like in the Sengoku–and the daimyo are left to fight and govern among themselves. As with the daimyo of Japan, Star Wars daimyo had obligations and a need to maintain order and stability within their domains. Weakness, real or perceived, is an invitation to be displaced. The term is just “other” and alien enough to ingrain a sense of difference for American audiences while also invoking a historical precedent without resorting to completely fictional titles such as Grand Moff.

This pattern of flattening Japanese history tends to put all of premodern Japan in a state of constraint strife to American audiences, ignoring long periods of peace. The increasingly common conceit of connecting the American West to premodern Japan bolsters this idea, generating a world where central authority is far away and order (or disorder) is maintained by a collection of lawmen and warlords. The samurai is the lone gunslinger, following a code of honor, in a land that is removed from “the bright center of the universe. There is also a presumption of violence in the process. As one daimyo falls, another takes his place. Position and order is maintained by power, and assassination and killing is one way to take a daimyo’s position. Fett distinguishes himself from his predecessors himself in episode 4 by offering loyalty to Fennec Shand–an attribute that only became a defining samurai virtue during the peace of the Tokugawa. During the Battle of Sekigahara in 1600, when Tokugawa forces fought the Toyotomi, daimyo commanders on the Toyotomi side defected to the Tokugawa. Betrayal ended the ambitions of Oda Nobunaga in 1582. The story of the 47 Ronin which is perhaps the greatest example of samurai loyalty took place in 1702–nearly a hundred years into the Tokugawa era.

Ultimately, Fett’s success will presumably rest on bridging two aspects of the daimyo–the martial prowess exhibited during the warring states era and the principles of honor and loyalty that emerged later. Notably, Shand refers to the group that Fett is assembling as a family–held together by more than simply money but by mutual bonds of trust and understanding.

(1) Since in this context daimyo is used as a Star Wars word and not a Japanese word, I’ll dispense with the italics.
(2) Andrew Gordon, A Modern History of Japan, 9.
(3) Gordon, 12.

0 thoughts on ““A Thousand Tidings to the New Daimyo”: The Book of Boba Fett and an Imagined Japan”