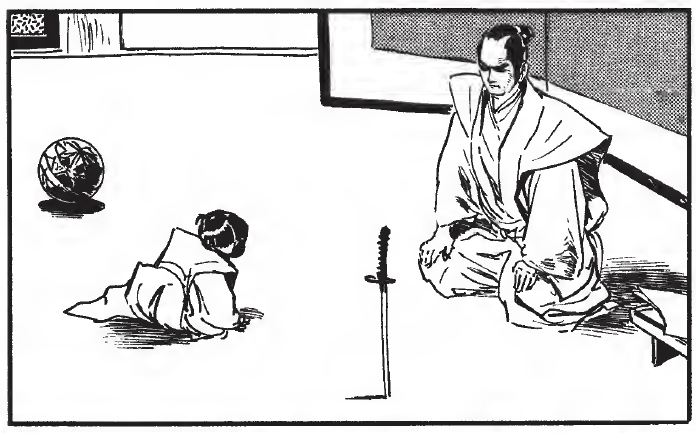 Spoiler warnings for Chapter 6 of The Book of Boba Fett and for Lone Wolf and Cub.

Early in the first season of The Mandalorian comparisons were made to the classic Japanese manga and later movie series Lone Wolf and Cub. The themes and motifs of the two collided as the Star Wars series has been compared to a Western by way of a Akira Kurosawa film. Japanese influences have long been imbedded in the DNA of Star Wars, with the well known connections to Kurosawa’s The Hidden Fortress (1958) evident in the original 1977 film. The Mandalorian and The Book of Boba Fett continue this trend taking direct inspiration from Lone Wolf and Cub, including repeating a pivotal scene from the manga.

In Lone Wolf and Cub, the Shogun’s executioner Ogami Ittō is framed for disloyalty to the Shogun after his wife Azami and household are murdered by assassins, with his infant son Daigorō left as the only survivor. Faced with an order to commit seppeku (suicide) he decides to allow his son to choose their future. Ittō offers Diagorō a choice between two objects: a temari ball and a sword. If Diagorō chooses the ball, Ittō will send him to be with his mother and then commit suicide as ordered. If the child chooses the sword, they will both walk the path of the assassin and seek vengeance for Azami’s murder and the dishonor from being framed for disloyalty. Little Diagorō crawls towards the blade and places his hand on the hilt, setting in motion the rest of the events of the manga.

In the final moments of “From the Desert Comes a Stranger,” Episode 6 of The Book of Boba Fett, Luke offers the young Grogu a choice between staying as a student in the new Jedi academy and a return to the Mandalorian by making him choose between two objects, closely echoing Ittō’s offer to his son. Luke presents the young child a beskar shirt left for him by the Mandalorian and Yoda’s lightsaber. Notably, Luke holds the short lightsaber blade much in the same way as Ittō does. As with Diagorō, both are irrecoverable choices–once a decision is made, there is no turning back.

The similarities between the two scenes certainly feel intentional, as the writers could not be unaware of  Lone Wolf and Cub. The use of this classic Japanese manga as an influence on one of the most well known American popular culture franchises speaks to a continuing fascination with Japanese media by American fans and cultural producers. While anime and manga have emerged as their own cultural force in the United States, older work is often left unexplored. Often, this can result in an homage to a classic series being overlooked by viewers but offering an interesting resonance to those aware of both bodies of work.

Tags lone wolf and cubpopular culturethe book of boba fett
0 thoughts on “The Blade or the Armor, the Sword or the Ball: Making a Choice in The Book of Boba Fett and Lone Wolf and Cub”