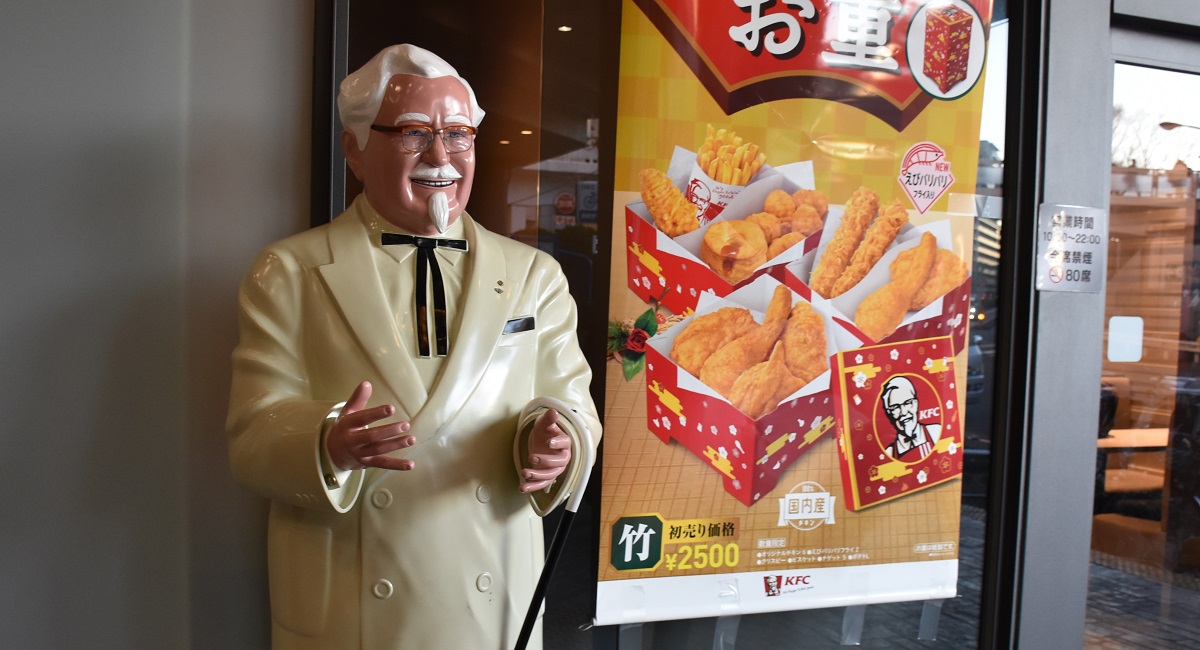 In Japan, Kentucky Fried Chicken has been the traditional Christmas dinner since the 1970s. The popularity of KFC for Christmas means signups for the holiday meal special start in early December, with long lines for those who miss the presale and big profits for the fried chicken chain. The usual KFC holiday meal comes with a bucket of fried chicken (called a barrel in Japan), a salad, chocolate cake, and a commemorative plate. (Author’s note: I still have my 2017 plate displayed in my kitchen). How KFC became a Japanese tradition is a story of an evolving Japanese take on Christmas and clever marketing appealing to a changing Japanese society at just the right moment in time.

The most commonly repeated story as described on KFC’s own web site explains how in the 1970s a member of the KFC advertising staff overheard an unhappy tourist visiting Tokyo on Christmas Day. The tourist complained, “ I can’t get turkey in Japan, so I have no choice but to celebrate Christmas with Kentucky Fried Chicken.” Inspired, the nameless KFC salesman developed a Christmas marketing campaign revolving around the slogan “Kentucky for Christmas.” The campaign targeted adults, selling a bucket of Kentucky Fried Chicken along with a bottle of wine. The idea proved to be immensely popular, kickstarting Japan’s love for KFC on December 25th.

This invented tradition filled a gap in the Japanese celebration of Christmas. After World War II, the influence of the United States on Japan rose after the crackdown on Western concepts that characterized the pre-war and wartime Showa era, and Christmas emerged as a fun gimmick for stores and shops that was aimed at children. Growing prosperity in Japan was tied to emulation of the American economic model, which also included increased understanding of Western culture through an American lens. While ideas of capitalism and consumerism quickly colored the idea of the Christmas season in Japan as surely as in the United States, standing alongside borrowed concepts such as Santa outfits and Christmas trees, the idea of family coming together on the 25th to specifically celebrate had no precedent. As a nation, only about 1% of the population identifies as Christian. Other holidays already existed on the Japanese calendar that fulfilled family reunion time.

Notably, turkey remains a novelty in Japan even today, as evidenced by these screencaps from the 2015 anime The Disappearance of Nagato Yuki-chan. Japan has established holiday culinary traditions, an example being osechi-ryori (お節料理), customary New Year’s foods that dates to the Heian era (794–1185). As Christmas began rising in popularity as a secular, fun holiday, once the KFC campaign started, the idea of fried chicken for a Christmas dinner quickly answered the question of what to eat on the 25th. The bottle of wine included in the promotion also helped build the idea that Christmas wasn’t just for children–it could be an adult celebration as well. KFC has continued to promote fried chicken for Christmas, featuring since 2000 the song Suteki na Holiday (すてきなホリデイ）by Citypop classic Plastic Love singer Mariya Takeguichi.

As Eric Hobsbawn noted in his 1983 book The Invention of Tradition, “Conscious invention succeeded mainly in proportion to its success in broadcasting on a wavelength to which the public was ready to tune in.” In the 1970s the Japanese public was riding a rising wave of economic prosperity and Christmas as a time of celebration and gift giving was also rapidly evolving into a societal norm in a new consumer oriented culture. The “Kentucky for Christmas” advertising campaigned offered the right idea at the right time–a distinct food (and a very American one at that), a nod  towards adult pleasures that could still be regarded as a family meal, and a meal that was just foreign enough but not hard to obtain so it could be universally enjoyed across Japan. The television, once a rare postwar luxury, had exploded into prominence in Japanese households in the late 1950s and was as powerful a force as it was in America, giving the “Kentucky for Christmas” campaign a broad audience. Added to this was also the increasing ubiquity of KFC in Japan with their distinct storefront statues of Colonel Sanders, who once adorned with a few choice articles of Christmas gear bore more than a passing resemblance to old St. Nick. Today, storefront Colonel Sanders are usually bedecked in Santa costumes during the holiday season. (For a darker side of the Kentucky Colonel in Japanese culture, check my post on the Curse of Colonel Sanders.)

KFC Japan’s Twitter account has offered an alternative account to the established story. In a December 6th, 2021 tweet, the account related how Takeshi Okawara, the manager of the first KFC in Japan, was asked to play the role of Santa for Christmas by a local kindergarten. Naturally he gave out KFC to the children and their families, an act which wound up being very popular. This new tradition spread out to other KFC locations as the brand expanded operations in Japan. Yet another tale emerged from a 2017 U.S. Army Garrison Japan Public Affairs program that claimed a foreigner requested that a worker from a local KFC deliver fried chicken in a Santa costume, a stunt that was well received and soon emulated by others.

Whichever origin story is correct, if the truth is a combination of all three, or if all these stories are embellished inventions (as the Joker said in The Killing Joke, “If I’m going to have a past, I prefer it to be multiple choice”) KFC has become the de-facto Christmas meal in Japan.  Christmas is also notable for being one of the biggest dating days of the year in Japan. but that is material for another post.

“How ‘Kentucky for Christmas’ Began in Japan,” December 05, 2020,
https://global.kfc.com/stories/how-kentucky-for-christmas-began-in-japan/

“How KFC Became a Christmas Tradition in Japan,” December 24, 2020,
https://www.cnn.com/travel/article/kfc-christmas-tradition-japan/index.html

Screencaps of The Disappearance of Nagato Yuki-chan by Satelight.