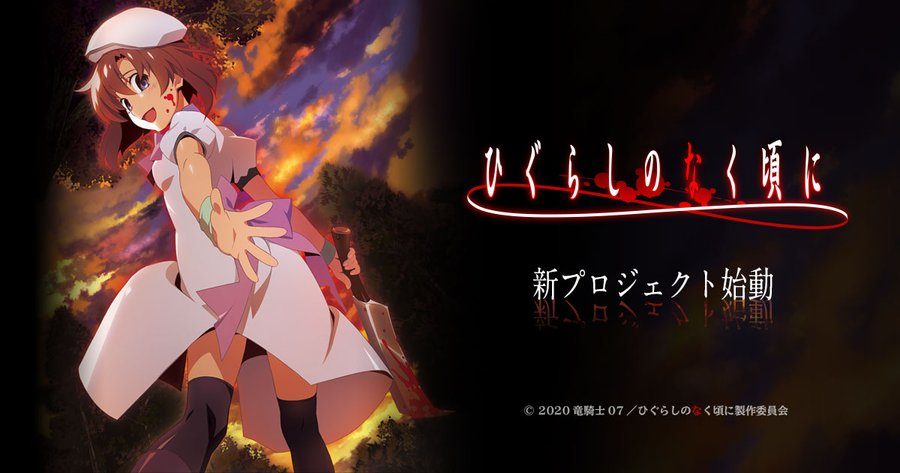 Higurashi When They Cry (ひぐらしのなく頃に) is a horror/mystery media franchise encompassing a series of visual novels, a 2006 anime, live action films and television series, a virtual reality experience in Tokyo in 2018. and now a new 2020 anime remake. Without going into spoilers, the series generally revolves around the dark events that befall a group of friends in the small mountain town of Hinamizawa in the summer of 1983. As is usual in anime, the fictional Hinamizawa is based on a real world location, the town of Shirakawa-go in Gifu prefecture. The following are images from the anime and visual novel compared with photos of locations taken at Shirakawa-go in the summer of 2012, with commentary about the significance of the sites. As the new series airs over the Fall of 2020, I will add additional photos and comments

Shirakawa-go is a World Heritage site, notable for the distinct gassho style of grass roofed homes. The roofs are sharply triangular, which help keep the snow from piling up during the heavy winter snowfalls. While most of the houses are private residences, a few are open to the public with exhibits on the traditional crafts of the region. The houses feature prominently in the anime, lending a recognizable visual element to the series. A second noticeable element in the series are the sound of cicadas, the cries mentioned in the title of the series, a familiar part of summer in Japan.

In 2012 Shirakawa-go had not yet embraced the notoriety that came with its status as the model for Hinamizawa. However, this has changed as the town has featured Higurashi themed events and has even erected statues of the main characters. This overall trend towards accepting pop culture tourism has become prevalent in Japan in recent years. Kanda Shrine in Tokyo and Washinomiya Shrine in Saitama have leaned into their association to Love Live and Lucky Star respectively. As Japan’s population ages, tourism has become a major source of income for many of Japan’s shrines and cultural sites. Japan has shifted into a mode of promoting its culture and history to the world in what Douglas McGray has called Japan’s Gross National Cool. The rise of Cool Japan has been encouraged by the Japanese government as a way to substitute cultural “soft power” for economic and military “hard power.” Anime inspired tourism has become a major draw for both domestic and foreign tourism. (Data point of one: although I was interested in seeing the gassho homes of Shirakawa-go, it was the connection to Higurashi that finalized the trip on my schedule. Of the four people on the bus, two of us were interested in seeing the anime connections in the town.)

Higurashi When They Cry began as a doujin “sound novel,” a variation of visual novel with no choices involved in the story. While the backstory of the town is only hinted at in the anime, events in Japanese history figure prominently in the story. In the sound novel Mion explains how Hinamizawa village was changed by the Meiji government which rose to power in 1868 after the tumultuous years following American Commodore Perry’s arrival in 1853. According to Mion, the new Meiji authorities were anxious to bring Japan into the modern world. In Hinamizawa, this involved eradicating a belief the villagers were descended from unions with demons. A darker part of the story states the villagers were then ostracized as the mythic power of their supernatural associations were stripped away. While the village suffered great losses during World War II, the reforms under the American Occupation helped restore the villagers reputation and status. However, another cloud of suspicion fell over the village as its postwar recovery was fueled by military canned goods stolen by Mion’s grandfather Sohei Sonozaki in the dying days of the war. Rumors followed that the canned goods were human flesh and that Sohei was involved with the infamous biowarfare Unit 731, as Sohei has been stationed in China. The mix of supernatural and real world fears converged to continue to mark Hinamizawa and its people apart, even in 1983.

I visited Shirakawa-go in July of 2012, approximately around the same timeframe as the series which takes place in June, so the scenery and views reflect how Hinamizawa looks in the anime fairly closely. As Shirakawa-go is difficult to access without a car, I took a special charter bus from the nearby town of Takayama. There was a morning and afternoon bus and I opted to take the morning bus and return on the afternoon bus to maximize the amount of time I had to explore the village.

If you’re interested in the topic of virtual and dark tourism, I wrote an essay on history and dark tourism entitled “Remembering Fictional History and Virtual War” in the massively multiplayer online game EVE Online for the book Virtual Dark Tourism: Ghost Roads, edited by Kathryn McDaniel. Full disclosure: although I contributed to the book I make no profit off any sales.

Tags animehigurashihinamizawahorrorshirakawa-gowhen they cry
0 thoughts on “Higurashi When they Cry: Shirakawa-go and the Inspiration for the Anime”