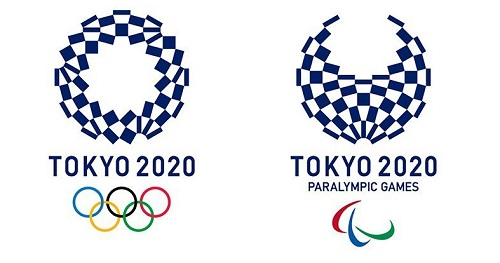 The logo for the 2020 Tokyo was created by artist Asoa Tokolo and the checkered indigo blue design is based upon the traditional Japanese pattern called ichimatsu moyou.

Ichimatsu moyou (市松模様?) is named for the kabuki actor Sanogawa Ichimatsu I (佐野川 市松?) Active as an actor from 1733 until his death in 1762 at the age of forty, Ichimatsu was renown for playing young men on stage. He was also well known for his personal beauty, which garnered him many admirers. During performances in Edo in 1741, Ichimatsu used a distinct ichidatami (checkerboard) pattern on this clothing, which led to a minor fashion furor. The pattern came to be known as ichimatsu moyou after the actor.