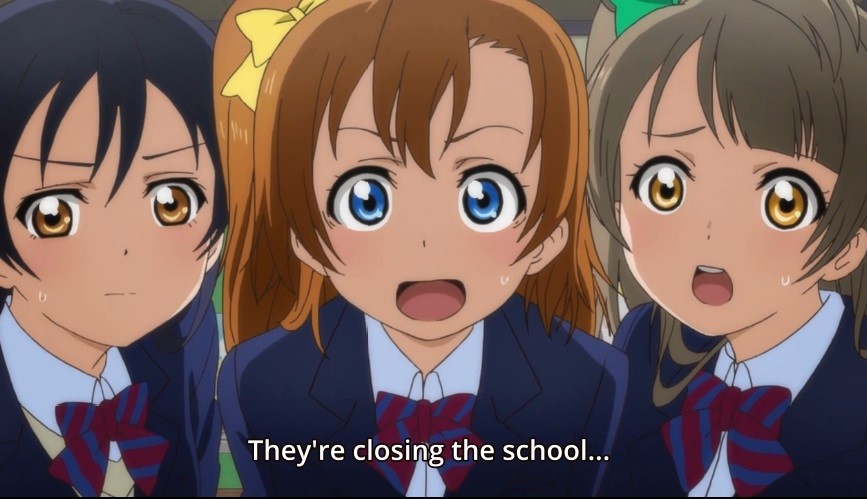 The central plot element around which the storylines of Love Live: School Idol Festival and its successor Love Live Sunshine are draped is the imminent closure of the protagonists schools. In both series, the main characters rally together to become school idols in order to attract new students to enroll and in doing so save their institutions. To Western viewers, the closure of the schools might be regarded as simply a convenient plot device to add dramatic tension, urgency and legitimacy to the main characters quest for school idol stardom, a Maguffin that is easily accepted in order to proceed with the story. The scenario also calls to mind the classic cinematic tradition of underdog films such as Meatballs 2, PCU, Animal House or even Major League, where the authorities are planning to shut down the summer camp/fraternity/baseball club and the plucky heroes must save their beloved institutions. However the subject of school closures in Love Live is not merely a narrative framing device but an issue that speaks to an increasingly serious problem within Japan, an matter that has resonance with Japanese audiences while being relatively opaque to Western viewers.

Japan’s population is on the decline, with the Japanese government estimating a drop from 126 million people in 2017 to approximately 88 million in 2065. The Japanese population is also aging rapidly, with projections seeing 40% of the population older than 65 by 2065. With a diminishing, older population, resources are being shifted towards providing services for the elderly while the need for schools is decreasing as there are increasingly fewer Japanese of school age. Schools are facing being closed down or combined as enrollment numbers fall.

On the other side of the coin, a diminishing pool of available students means competition is now becoming intense between schools. Unlike American public schools where placement is usually a geographical matter, schools in Japan have entrance examinations which a student must pass to earn a place–a common element in school related anime. Where schools could once afford to be extremely selective, now even prestigious institutions must consider allowing admission to students with lower scores in order to maintain their student body size and ensure their future. Arguably, the new need to attract students is threatening to lead to a decline in entrance standards, which in turn threatens to erode not only the reputation of Japan’s premier institutions but also the quality of their graduates. Schools hurting for students now must weigh their survival versus maintaining a certain standard. How low do you go? Certain high schools in Japan have connected universities and guarantee admission to students who successfully graduate–successful meaning passing, even if barely. It is a lack of new students opting to apply to Love Live’s Otonokizaka Academy that puts the school on the knife’s edge of closure. Private schools in particular are dependent on attracting students to stay open. For parents and students this means they now hold the whip hand.

Consider the situation of Otonokizaka Academy, the primary setting of Love Live School Idol Festival. After protagonists Umi, Kotori and Honoka learn their school is going to close, the three attempt to figure out what about their school can be attractive to new students.  A sweet location somewhere near Akihabara and Kanda shrine notwithstanding, the trio come up empty handed except for vague allusions to the school’s rich past. The schools clubs and achievements, they notice with some chagrin, are lackluster. It is this lack of any other distinguishing characteristic that motivates the three schoolgirls to form an idol group after Honoka notices the reputation of UTX, a flashy new school, is bolstered by the presence of the popular school idol group A-RISE.

Although the series focuses on the impact of A-RISE on enrollment, it should also be noted that UTX has elements which Otonokizaka and the girls cannot easily compensate for. After the tour of the traditional Otonokizaka with unimpressive results, the brief glimpse of UTX is one of an ultramodern school. The takeaway for viewers is that UTX is a more technologically advanced school, with amenities and impressive facilities not found in Otonokizaka. A second season episode shows UTX has a coffee house and cafeteria with flat screen televisions and students in sleek white modern uniforms. Compare that to Uranohoshi Girls’ Academy in Love Live Sunshine, where Dia ruefully notes that the classrooms do not even have air conditioning as the Aqours girls languish in the summer heat. Which school would a student rather attend, if given the choice?

In a sense, μ’s had it easier than Aqours in trying to save their school. As a rural school, Uranohoshi Girls’ Academy faces the double whammy of decreasing enrollment and the tendency for young adults to move towards major population centers. Even today, concern is rising that students are eschewing quality regional universities in favor of schools in the major cities. The Japanese government is considering imposing restrictions on student enrollment in Tokyo to prevent even greater flight of youth from rural areas to the urban centers. Ultimately, the efforts of μ’s and Aqours to save their schools come to very different conclusions. μ’s is victorious in Love Live and is able to gain enough new applicants to keep Otonokizaka Academy open. Although they come close, Aqours, despite also winning Love Live, are unable to save their school and prevent its closure.

Perversely, the population pressure on schools comes as the Ministry of Education, Culture, Sports, Science and Technology (MEXT} is reassessing the current decades old yutori educational philosophy (ゆとり教育). Yutori education or “relaxed education” sought to end the strict, pressure-cooker Japanese educational environment and did away with compulsory Saturday classes. However, rising sentiment is of the opinion yutori education has weakened the abilities of a generation of Japanese students and stricter school standards need to be reintroduced. How the two concepts will reconcile is a question that is looming over the Japanese educational system. It is worth noting μ’s and Aqours both spend a great deal of time practicing to be school idols while apparently doing just fine in classes.

School idols aside, the differences between UTX and Otonokizaka Academy reflects to some degree the more consumer-driven emphasis in modern American education. What can Japanese schools offer a student is now the imperative, rather than the other way around. The situation is mirrored to a different degree in American universities. Facing budget crunches, many U.S. universities are opting to improve the undergraduate experience in order to draw in more students, as undergrads increasingly bear the costs incurred by schools. New dorms, lazy rivers, and enhanced football facilities often come at the cost of funding the academic side of universities.

Personally though, I would prefer some school idols.