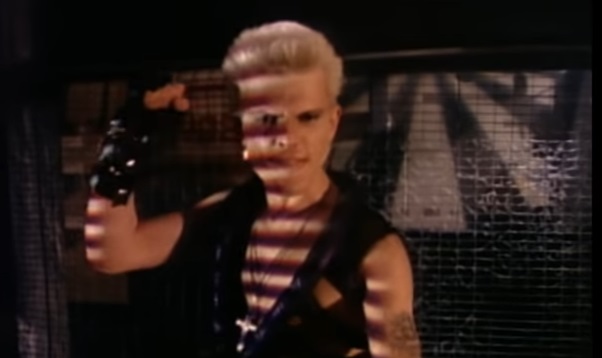 The origins of Billy Idol’s 1981 hit “Dancing with Myself” trace to a random encounter during Generation X’s 1978 Japan tour. When Idol and other members of the band visited an unnamed dance club in Tokyo, Idol noticed the young Japanese club patrons dancing in front of mirrors–effectively dancing with themselves.

Idol further describes the genesis of the song in an October 2014 Rolling Stone interview. “If you went into a discotheque in 1978 in Japan, they were all dressed like Saturday Night Fever. But the one thing they were doing that was differently than in England and America was they were dancing to their own reflections in the mirror and not really with each other. They were just looking at themselves. I happened to say to [Generation X bassist] Tony James, who always usually came up with the song titles, ‘Hey Ton, they’re dancing with themselves.’ He went, ‘Dancing With Myself,’ that could be a song title.’ And I remembered that a few months later, when we came to start writing the third Generation X record, which became Gen X.”

On the floors of Tokyo
Down in London town’s a go go
With the record selection,
And the mirror’s reflection,
I’m a dancin’ with myself

“Dancing With Myself” was originally recorded by Generation X in 1979. The song failed to chart and after the breakup of the band, Idol decided to re-record the song in 1981. The music video for Idol’s solo “Dancing With Myself” is a pure relic of the MTV era. Directed by acclaimed horror maven Tobe Hooper, the video blends elements of horror with a definitely 8os take on a post-apocalyptic, dystopian vibe. Despite the opening line, references to East Asia are scant, except for a brief moment with two children practicing martial arts and possibly a hint of the Japanese Rising Sun flag. Idol’s tattoo is prominently featured in the opening moments of the video. While the tattoo is of Octobriana, a Russian comic character created in 1971, the American tattoo artist Kevin Brady signed his name in Chinese characters, the kind of cultural blending often seen in body art.

The video begins with a zoom in towards a shattered apartment building. As grey clad zombie-like youth stir on the ground outside the building, Idol enters a cage elevator that begins to rise. As Idol begins singing the first line “On the floors of Tokyo,” a black and white pattern of rays reminiscent of the Japanese Rising Sun flag is visible in the background. Octobriana appears in a mural behind Idol and then in a focus on his tattoo.

In his memoir, also entitled Dancing With Myself, Idol relates the drunken night he obtained the tattoo, imploring the artist to not make Octobriana, “too Mongolian.”

The remainder of the elevator sequence points to a darker premise for the video, reflecting Hooper’s influence. In the first apartment two children in red are practicing martial arts. In the next scene, a sledgehammer swinging man (the father?) approaches an unsuspecting woman (the mother?) knitting on a couch. The cut away from the sledgehammer swinging man just before he reaches the woman is slightly awkward, either the result of a less than adequate take or stopping before a potentially more violent resolution than is seen in the video. Idol confirms in Dancing With Myself the father’s murderous intent but also stated the video had to abide by MTv’s censorship rules. The next apartment has a man sharpening a straight razor on a strop (shades of Sweeney Todd) while glancing at the silhouette of a women wrapped in a cable dancing–or struggling–behind a screen. Again, Idol relates the woman is meant to be a bound Octobriana. A final short segment shows a twitching skeleton and a laughing puppet on easy chairs.

The rest of the video shies away from these intriguing vignettes to focus on the grey clad hordes’ attempt to climb up the building as Idol sings from the rooftop. Despite blasting the youth off the building, they revive and begin the climb again. The video ends, as all good 80s movies should, with everyone dancing. Octobriana makes a final appearance on a billboard atop the building. The intriguing horror hinted at in the elevator sequence is never followed up upon.

Compared to The Police’s “So Lonely” the connections to East Asia are slim in the “Dancing for Myself” video. but the genesis of the song in a Tokyo nightclub is notable. Bands like Generation X and The Police found early success in Japan, a phenomena noted in Alphaville’s 1984 song “Big in Japan.” The Japanese market provided an audience for many Western bands, yet success in Japan was also seen as a measure of failing to make it big in the Anglophone world. Japanese musical taste was considered suspect and these factors weighed heavily in the construction of Japan in the Western imagination as a strange outlier, a subject that will be addressed in a future post.

Generation X performed in Tokyo at the Touyoko Gekijou, located on the top floors of the Tokyu department store in Shibuya, as part of a three date tour of Japan from June 25th to 28th 1979.

References and further reading
Dancing with Myself, Billy Idol, pgs. 117-120.
Billy Idol on Drinking With the Stones and Seeing Jesus in the Sex Pistols
setlist.fm – For Generation X tour information

Tags billy idoldancing with myselfJapanpopular culture
0 thoughts on “Dancing with Myself: Scenes from a Tokyo Nightclub”